Myproperty.ph explains what is a prenuptial agreement and why couples about to get married should have one 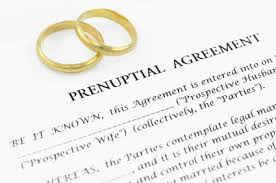 Many couples who are into their nth year (even month) of being together decide to get married because they feel, in all aspects, that they’re ready for the responsibility. Mentally, they believe it’s the most logical next step once they’ve reached a certain point in their relationship. Emotionally, they think they’re mature enough to have kids. And then there’s the I’m-not-getting-any-younger physical aspect. But if all you’ve done in the financial aspect is get stable jobs and save enough money to live off of, you might also want to consider getting a prenuptial agreement.

To most Filipinos, nothing puts a damper on the romantic idea of marriage like a prenuptial agreement. Because it’s a legal contract of how assets will be divided between husband and wife in the event of a separation, they think it’s like anticipating that the union will eventually end, which then kills the romance. But the reality is, money is one of the biggest issues that put a strain on a marriage, which is what makes a prenup even more essential.

So, who needs a prenuptial agreement?

Just because you’re not a high-profile couple that owns a home in Forbes Park and the United States doesn’t mean you don’t qualify for a prenup. The following are examples of when a prenuptial agreement makes sense:
In the event that you have a large amount of assets, such as an inheritance, it would be understandable that you’d want to continue to manage it on your own.
If there is a property that you own with another party, that other person might feel uncomfortable with the arrival of your spouse as a co-owner.
If you’ve been married before and the union resulted in children, you’d want to assure them that they’ll receive their rightful inheritance if you were able to acquire a property from that previous marriage.
Not all countries have the same laws about real estate ownership and disposition. With a prenup, you and your foreign-national spouse will be able to define the ownership of properties that are located abroad.

The three regimes of property relations

Under the Family Code of the Philippines, there are three regimes that will govern property relations between husband and wife: the system of absolute community (considered to be the default property regime), the conjugal partnership of gains, and the complete separation of property. On the other hand, couples married prior to the 1988 enactment of the Family Code follow the New Civil Code, which cites the conjugal partnership of gains as the governing system for property relations.

If you and your future spouse choose not to pursue a prenuptial agreement, what applies is the system of absolute community. This is a what-is-yours-is-mine scenario, wherein the husband and wife will co-own all of the properties they each bring into the marriage, as well as whatever they acquire in the duration of their marriage.

Still, there are some properties considered to be excluded from absolute community; namely, properties acquired during the marriage by gratuitous title, as well as its income, if any; property for personal and exclusive use of either spouse (although jewelry is still part of community property); and property (and income if any) acquired before the marriage by either spouse whose past marriage has resulted in legitimate children. Also, before attempting to transfer or sell any property, both the husband and wife should consent to the disposal.

If you do choose to go through with a prenup, one option would be the conjugal partnership of gains, in which properties acquired by the husband and wife before the marriage will be exclusively his or hers, but all of the all of the proceeds, products, fruits, and income from these properties and those acquired by either or both spouses through efforts or by chance are put into one common fund and considered jointly owned. Should the husband and wife part ways, this jointly owned fund will be split equally between them.

Under the conjugal partnership of gains, the husband or wife can also dispose of their exclusive property in any way without the consent of their spouse.

Another option, complete separation of property, means all assets will remain separate throughout the marriage and in the event of a separation. This doesn’t just mean the actual properties; all earnings from these properties will be separate, too.

Also, if the husband or wife wants to dispose of their exclusive property in any way under the complete separation of property, they can do so without the consent of their spouse.

Remember that a prenup should be executed before marriage, as agreements and changes made after the ceremony (except in cases of judicial separation of property during the marriage) are considered invalid. If the husband and wife would like to change their property relations, they will have to do so by filing a petition in court.

Creating and filing a prenuptial agreement

There’s no strict format for drawing up a prenuptial agreement, but because it is a legal contract, it has to be in written form, as verbal contracts are not considered binding. It has to clearly state all of the conditions that the husband and wife have in relation to their assets. At the very least, it should contain:
A heading stating that the document is a prenuptial agreement
The full names of the husband and wife
The date when the document was written and signed, which should be before the wedding
A clause stating that both parties were willing participants to the prenuptial agreement and that they understood its contents
A full disclosure agreement
A severability clause
An arbitration or mediation clause
The assets to be included in the contract
The division of assets once the couple is married
How debts incurred by the husband or wife will be handled
How assets will be divided in the event of a separation (either through conjugal partnership of gains or the complete separation of property), as well as other particular conditions
Actions to be taken in situations such as the death of the husband or wife, or if either party has a child born out of wedlock

The document is then brought before a Notary Public for notarization and submitted, along with the necessary documents, to the Civil Registry of the city or municipality that issued the marriage license. Once the document has been reviewed and approved and the required fees have been paid, the contract will be registered and a certified true copy to be attached to the marriage certificate will be supplied.

Established in September 2010, MyProperty.ph is a leading Philippine real estate online and print brand that brings property buyers and sellers together. The website’s main offerings are listings of pre-selling properties and properties for sale and for rent. Both website and magazine also provide relevant and updated industry news and information for its clients and consumer
*This is Press Release