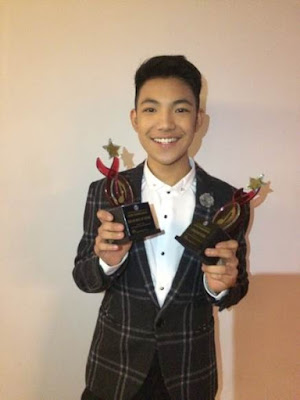 There’s no stopping The Total Performer Darren Espanto as he adds 2 more from the list of his many achievements. He recently won at Star Awards for Music bagging the Male Pop Artist of the Year and Cover Design of the Year (for the album “Be With Me”). Held at Novotel Hotel at Araneta Center, the award is given annually by the Philippine Movie Press Club.

Darren just released his latest single “Alam” from the album “Be With Me” with its music video premiering this month on VEVO. The single is composed by veteran songwriter Jungee Marcelo who also penned hits for Gary Valenciano, Daniel Padilla, Zia Quizon, Sitti and Lyca Gairanod among others. His previous singles “7 Minutes”, “Starlight” and “Parachute” peaked at #1 on the countdown of music channel MYX and various radio stations in the Philippines.

“Be With Me” is now out through digital downloads and streaming via Spinnr, iTunes, Apple Music, Spotify and VEVO and in CDs at Astroplus and Astrovision outlets. For inquiries, contact MCA Music artist management at 9162504 local 107 or 0920 9682991 or email mcabooking@umusic.com.