Philippines: The stress of the Race gets to Rona 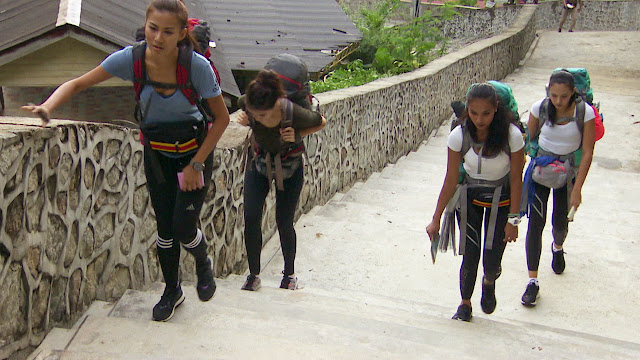 Last episode’s first team, Yvonne and Chloe kicked off leg three with good news – they are heading back to their homeland in Kuala Lumpur, Malaysia! But first, teams need to travel from Bandung to Jakarta’s Senayan City Mall to purchase their air tickets. At Garuda Indonesia’s office, the teams realize that the earliest flight to KL is the next day at 8.35am.

Right when they land, the teams make a quick dash out. While the other teams are directed to get an airport taxi, Eric asks around for a metered taxi, giving Eric & Rona an advantage. At Menara Great Eastern Building in Kuala Lumpur, teams face their first Roadblock challenge. One of them must rappel down the side of a 300 foot skyscraper to retrieve a flag. Teams that miss the flag or drop it, must attempt the challenge again.

Eric & Rona, Tom & Anita are the first two teams to rappel down while it’s just starting to rain. As Louisa &Treasuri are getting ready, the teams received a lightning warning and they have to head back indoors to wait for the storm to pass. Eric & Rona, Tom & Anita head to KL Sentral Station where they have to take the earliest train to Penang. They are disappointed to find out that the next available train is at 5.50pm, almost 3 hours away, which will give the other teams a chance to catch up.

Once the rain let up, Louisa &Treasuri, Parul& Maggie and Yvonne & Chloe speed down the building easily and they quickly make their way to the train station. Unfortunately, JK & Mike, Alex & Will and Vicky & Rach did not find the flags and they have to retry the challenge again.

Showing that they are resourceful, Louisa &Treasuri are not deterred by the 5.50pm train. They found out that there’s an earlier train at 5.20pm and they decided to ask around for a swap and successfully did so, much to the chagrin of Eric & Rona and Tom & Anita. Parul& Maggie and Yvonne & Chloe managed to get onto the 5.50pm train with Eric & Rona and Tom & Anita. Rach & Vicky went to the wrong train station but they are relieved to find out that there’s an 8pm training, joining JK & Mike and Alex & Will.
The race resets in Penang when the teams rush to the Waterfall Hill Temple, only to find out that it’s closed and will only open after sunrise. Once the temple opens, the teams must make their way up 500 steps to receive their next clue – they have to head to Clan Jetties to search for a clue box among the four Chinese Clan Jetties.

At Clan Jetties, teams face a Roadblock challenge. They must choose between ‘Street Art’ and ‘Street Play’. In ‘Street Art’, teams have to locate a specified number of murals and have their photos taken by a bystander. Each photo taken must satisfy a number of specific poses and tourist participation. In ‘Street Play’, teams have to master 2 minutes of Chinese Opera choreography and perform it in front of a judge.

Louisa &Treasuri work their magic with ‘Street Art’ challenge, finding the murals in good time. They quickly complete their challenge and have to head to this leg’s pit stop, located at Hean Boo Thean Temple. At the pit stop, Allan Wu and The Amazing Race Asia season 1 winning team Zabrina& Joe Jer are waiting for the teams and the last team to arrive may be eliminated. Louisa &Treasuri are emotional to find out that they are the first team to arrive while Allan praises them for a job well done.

Alex & Will, Yvonne and Chloe and Tom & Anita are the next three teams to arrive at the pit stop respectively. Team Philippines’ Parul& Maggie and Eric & Rona are the fifth and sixth team to arrive. The stress of the race seems to be getting to Rona, causing her to breakdown at the pit stop.
After much difficulty, JK & Mike finally complete their Roadblock challenge putting them at 7th position, second last place in this leg. Rach & Vicky dejectedly make their way to the pit stop where Allan Wu surprised them that this is a predetermined non-elimination round and they are still in the race! 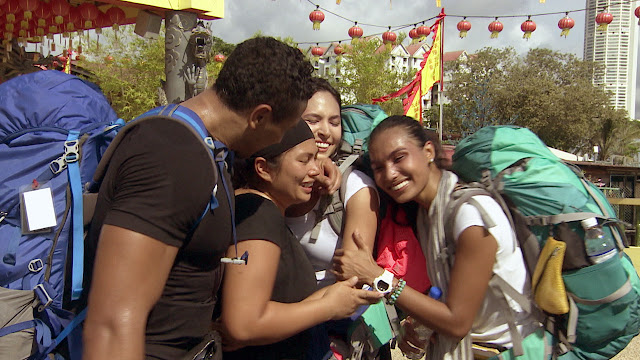 Rach & Vicky agree that they need to fight less and just focus on the Race.
Coming up in next episode, teams fly to Phuket, Thailand and go up close and personal with the elephants! Teams’ endurance and emotions are tested yet again at the Road Block challenge.

Join the action and connect with Allan, Tara and the 22 racers via:#AXNTARA and @TheAmazingRaceAsia

Check out www.AXN-Asia.com/TARA for all the latest news on The Amazing Race Asia Season 5

About The Amazing Race Asia Season 5

In this latest season, 11 teams of socially savvy, fearless racers from all over Asia will embark on a once-in-a-lifetime experience, traversing the globe and proving their mettle on a quest to be crowned the all-out champion.

Travelling to multiple countries in the shortest amount of time, each team will arrive at a new destination where they must compete in a series of physical and mental – and often emotional – challenges. Only when the tasks are completed will the teams learn of their next exotic location. Teams who fall the farthest behind will gradually be eliminated as the race progresses, with the first team to arrive at the final destination winning The Amazing Race Asia and the USD$100,000 cash prize.

The 11 chosen teams hail from six countries across Asia and represent a true cast of characters with diverse personalities, backgrounds, talents and relationships. They range from popular Singaporean DJs to Filipino beauty queens and promise viewers a highly entertaining and edge-of-your-seat journey.

About AXN
AXN is Asia’s leading general entertainment channel featuring exclusive top-rated drama series, blockbuster features, reality programs and groundbreaking original productions. The channel appeals to a discerning audience seeking content that is smart, intriguing and unexpected, and all delivered close to the U.S telecasts. From critically acclaimed series, The Blacklist and Quantico, to award-winning reality shows, The Voice and The Amazing Race Asia, AXN is defined not by a genre, but by an attitude that truly redefines action.
First launched in Asia in 1997, AXN is a global channel brand with a presence in Latin America, Africa and Europe. In Asia, AXN is enjoyed in 85 million households across 20 territories.
AXN Asia is wholly owned by Sony Pictures Entertainment and managed by Sony Pictures Television Networks, Asia, which also operates leading channels Animax, Sony Channel, ONE and GEM.
www.AXN-Asia.com