Team Lakay’s Kevin Belingon: “I’ll Just Fight Him Like We Are at War” 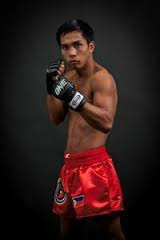 Kevin “The Silencer” Belingon is a man of patience.
Nine months removed from his last bout, the Baguio City, Philippines­based bantamweight fighter will return to the cage on Friday Night, 7 October, when he battles Muin Gafurov at ONE: STATE OF WARRIORS at the Thuwunna Indoor Stadium in Yangon, Myanmar.
“I’ll take this fight patiently,” the 28­year­old says. “I’ll just wait for my opportunity to go inside or wait for my opportunity to attack, because he is a tough fighter. I can go stand­up with him or fight him on the ground.”
Belingon, a former ONE Championship title challenger, is motivated to bounce back from his most recent loss. The Team Lakay product fought ONE Bantamweight World Champion Bibiano Fenandes at ONE: DYNASTY OF CHAMPIONS (CHANGSHA) this past January, and was submitted via kimura just four minutes into the first round. He simply couldn’t implement his gameplan that night, as he wasn’t able to control the cage the way he normally does.
This time around, against Gafurov, the Filipino doesn’t plan to make the same mistakes he committed in his previous bout.
“I learned a lot of things, especially miscalculating the stance or the fight distance against my opponent,” he explains. “This next fight, I will calculate the fighting stance or I’ll just move around. My game plan here is to strike with my opponent, so I’ll just wait for him to move. Then, that’s when I will attack.”
Belingon has always attacked the sport with a certain tenaciousness and ferocity. Starting out on the Philippines regional scene back in 2007, Belingon, a well­rounded mixed martial artist with a wushu background, amassed an impressive nine­fight winning streak and captured the URCC Flyweight Championship.
Following his ninth consecutive victory, the Filipino inked a deal with ONE Championship. Unfortunately, there seemed to be a serious jump in competition, as he began his career with the largest promotion in Asia on a two­fight losing skid.
“ONE is a different level from the fighters here in the Philippines,” he says. “The fighters in ONE are tougher and stronger than my opponents before here in the Philippines. I was undefeated before I came into ONE, and then in my first fight I lost, so ONE is a different level. There are a lot of challenges there, and different challenges.”
The step up in competition forced the Team Lakay product to enhance his training. In the past, he didn’t put all of the facets of mixed martial arts together as a whole. But now, from striking and grappling to overall fitness, Belingon has every portion of the cage game covered.
For more updates on ONE Championship, please visit www.onefc.com, follow us on Twitter and Instagram @ONEChampionship, and like us on Facebook at https://www.facebook.com/ONEChampionship.