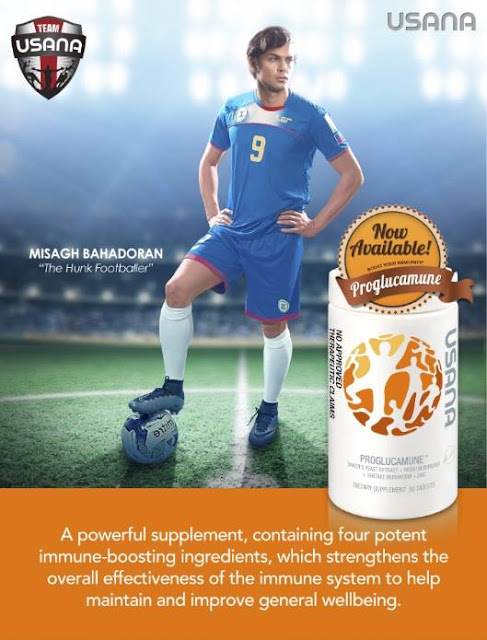 Global nutritional company Usana Philippines gives thanks today to another year of breakthroughs in 2016 in its advocacy to promote good health across all sectors nationwide. Its various accomplishments during the past year touched the lives of Filipino athletes, empowered the youth and contributed significantly in relieving suffering and hunger around the world, among others.
Aurora “Duday” Gaston, USANA Vice President for the Philippines and Indonesia, shared highlights from the past year where USANA:

• took home two major awards at the 2016 DSA annual meeting. Its charitable organization, the USANA True Health Foundation (THF), was presented the Vision for Tomorrow award in the philanthropy category and USANA was also named to the Top 20 list of direct selling companies.
• True Health Foundation graduated 300 Cornerstone Foundation scholars after supporting a year of regular Saturday tutorials and feeding program.
• launched the third batch of Team USANA Pilipinas athletic ambassadors to help inspire people to stay healthy and fit for competition.
• Introduced Proglucamune, a new immune system boosting optimizer, that helps strengthen the immune system.
• Launched USANA Probiotic, a food supplement that supports digestive health.
“The company’s achievements in 2016 are a direct result of our dedicated associates, who focused on providing safe, quality and convenient health products to an expanding base of customers and consumers, and in introducing innovative ways to market them,” Ms. Gaston said. “Our goal is to deliver accelerated growth to USANA as well as to all of us who depend on it in our daily lives. We think that we have made a very strong performance in 2016 and promise to surpass it in the years ahead.”
Major Awards for Charity and Profitability
At the 2016 Direct Selling Association (DSA) annual meeting, USANA True Health Foundation, USANA’s charitable organization, was honored with the Vision for Tomorrow award in the philanthropy category. Through donations, the Foundation’s worldwide programs provide critical necessities such as nutrition, clothing, shelter, medical assistance and health education to disadvantaged and disenfranchised communities around the world. Among other assistance, it supplied $225,000 in disaster aid, vaccines and water purification tablets to Malaysia, the Philippines and victims of the earthquakes in Nepal, and distributed $87,192 in materials to help rebuild fishing boats among those affected by Typhoon Yolanda.
The global nutritional company was also named to the Top 20 list of direct selling companies by the DSA, based on 2015 U.S. net sales. Over the last few years, USANA has seen amazing global financial growth, with the company recently reporting its 13th consecutive year of record sales and earnings. Net sales for 2015 increased by an exceptional16.2 percent to a record $918.5 million. USANA has also been named to the Top 20 list in 2013 and 2014 and looks to become a mainstay on the DSA Top 20 list in the future.
These two awards given by an internationally recognized industry association bolster the reputation of USANA as a global leader in multi-level marketing. They speak well of the years of hard work and entrepreneurial foresight to establish and sustain a highly competitive yet well-managed multinational organization.
Within the company, USANA Philippines’s customer service team proudly made history as it received the first-ever International Contact Center of the Year award from Robby Gold, executive director of customer service. The award, established only this 2016, was based on industry standards of service levels and abandoned percent rates, and encompasses the call center, order desks and pick-up/will-call desks.
Youth Empowerment for a Better Future
After a year of regular Saturday tutorials and a feeding program conducted by volunteers of USANA True Health Foundation and Cornerstone Foundation in Paranaque City, more than 300 primary and secondary pupils marched on Moving Up Day, the graduation day of Cornerstone scholars. The event marked the fruition of the two foundations’ continuing vision to sustain the youth with good health so they can maximize their potentials. It’s also a testament that quality education can be made accessible to the poorer segments of society.
Even in its CSR activities, USANA reaffirms its commitment to share the blessings of its windfall fortune to the less privileged sector of society. The uplift of a Filipino community is the latest success story in a broad range of beneficial projects USANA has undertaken across the globe over the years.
Inspiring Filipinos to a Healthy Lifestyle
Now on its third year, the latest batch of Team USANA Pilipinas was launched to serve as role models to Filipinos from all walks of life. The team is composed of Filipino athletes from various sports who rely on USANA to keep themselves healthy and fit for local and international competitions. At the same time, the athletes serve as an inspiration among Filipinos to achieve success by living well.
The 3rd batch of Team USANA Pilipinas joins more than 1,000 world-class athletes who take USANA to stay in top shape. This faith in USANA health supplements reflects their personal and professional trust that each USANA product is safe and of premium quality.
Happy Tummy, Strengthened Immunity
In 2016, two new products were introduced to the market in response to challenges in today’s changing lifestyle. USANA Probiotic is a food supplement that supports digestive health while Proglucamune boosts the immune system.
USANA Probiotic features a unique 50/50 mixture of two strains of probiotic bacteria that support a natural balance of beneficial microflora in the gut. In addition, the probiotic bacterial strains in USANA Probiotic also help promote and sustain a healthy immune system through improved gut health. More immune cells are concentrated in the gut than in any other region of the body, and substantial amount of specific probiotics can strengthen the body’s natural defenses by modulating the cellular immune response. A healthier digestion leads to productivity and helps people get more out of life.
Scientifically developed for the immune system, USANA Proglucamune is packed with four immune-boosting ingredients, namely Shitake Mushroom, Reishi Mushroom, Baker’s Yeast, and Zinc. It combines ancient wisdom with modern science so immune cells work faster and more efficiently.
USANA makes a difference by being a world leader in scientifically developed health products. Its Probiotic and Proglucamune are the newest health supplements to come from a long line of quality products that incorporate the results of in-depth scientific studies and produced though state-of-the-art manufacturing facilities in the USA. These unique corporate strengths set USANA apart from the competition.
For more information on USANA products and USANA Philippines, visit and follow USANA’s social media portals on Facebook (www.facebook.com/OfficialUSANAPhilippines), Twitter (@usana_ph), and Instagram (usanapilipinas).

*This is Press Release
Posted by Boy Raket at 5:17 PM