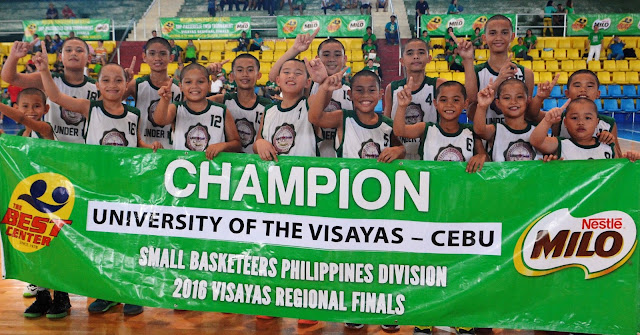 The University of the Visayas (UV) and Bacolod Tay Tung High School advance to the nationals after winning the Visayas regional finals of BEST Center’s SBP– Passerelle, the largest twin tournament in the country.  Held at the Capiz Gym, eight teams – four for each division – battled against each other, representing their schools and provinces from across the region.

UV had a tough time defeating the equally strong opponent, the University of St. La Salle Of Bacolod but eventually nipped the championship award for the SBP division, 47-46. On the battle for the 3rd place, Colegio de la Purisima Concepcion of Roxas easily defeated Hua Siong College of Iloilo, 52-48.

During the Passerelle division, UV only settled 2nd place on their match against Bacolod Tay Tung High School, 56-52. St. Robert’s International Academy of Iloilo came in 3rd after winning against Hercor College High School of Roxas, 72-63.

UV also received the Sportsmanship award in the Passerelle division, along with Hua Siong College Iloilo for the SBP division, after showcasing fair play not only among players but also among the coaches and parents who attended the tournament.

Organized by the multi-awarded school for basketball and volleyball, BEST Center, sponsored by Milo, and supported by Chris Sports and Rain or Shine, SBP-Passerelle is the longest running and most prestigious interschool basketball competition for children where students ages 9-11 compete in the SBP division, while students ages 12-14 compete in the Passarelle division.