An historic day for the MICHELIN Pilot Sport EV 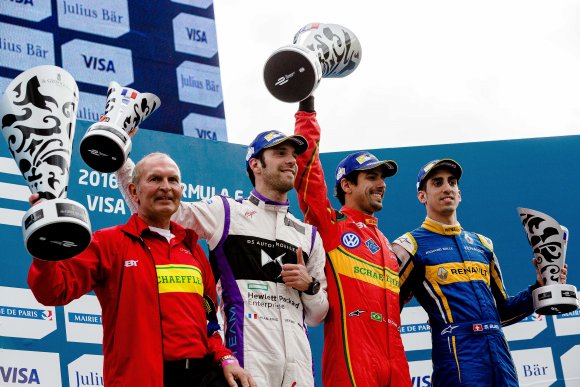 The inaugural Paris ePrix took place in chilly but dry weather, a first for the MICHELIN Pilot Sport EV and a challenge to which it rose without flinching.


The first Formula E race in the streets of Paris was a moment that the teams had long been waiting for, especially the French teams, of course, and also Michelin, a founding partner of the innovative electric single-seater series.

The 14-turn circuit of almost two kilometres in length formed a loop around the famous Hôtel des Invalides in the French capital’s seventh district and it turned out to be one of the most technically demanding of the championship. Its profile and surface were particularly hard on tyres, while Saturday’s cold weather – which saw the temperature rangefrom 9 to 12°C – prevented them from reachingtheir ideal working temperature as quickly as possible.

Serge Grisin, manager of Michelin’s Formula E programme, didn’t see that as a major problem, however: “Since the beginning of the Formula E Championship, we have come across practically all the types of conditions you can imagine. Our tyres have performed in track temperatures ranging from as lowas 5°C during testing at Donington [Great Britain] and Issoire [France], to as high as 55°C in Putrajaya [Malaysia] and Buenos Aires [Argentina]. The versatility of the MICHELIN Pilot Sport EV, which was designed specifically for Formula E, is unique in the world of single-seater racing.”


“Transferring technology from the race track to the streetis effectively a driving force behind Michelin’s involvement in motorsport.”

- The MICHELIN Pilot Sport EV’s interior diameter - 18 inches – permits a direct carry-over of the technologies it packs to mass-produced tyres, since the FIA Formula E Championship provides a life-size proving ground. Formula E is the first single-seater championship to use tyres of this diameter.

- Its tread pattern is visually similar to that of a road tyre, or a racing tyre for wet conditions, but the MICHELIN Pilot Sport EV is used by the Formula E teams whatever the weather.

- Each Formula E car is allocated a single set of tyres for the entire race day (free practice, qualifying and the race itself). In order to minimise the number of tyres used in the championship, the spares are tyres that are carried over from the previous ePrix.


Because of its patterned tread and 18-inch interior diameter, the MICHELIN Pilot Sport EV resembles a road tyre. Yet it packs numerous technologies that are currently being tested with a view to their being carried over to Michelin’s catalogue tyres over the coming years.