Celebrate the Season of Fun with Sony Channel's Summer Escape 2016 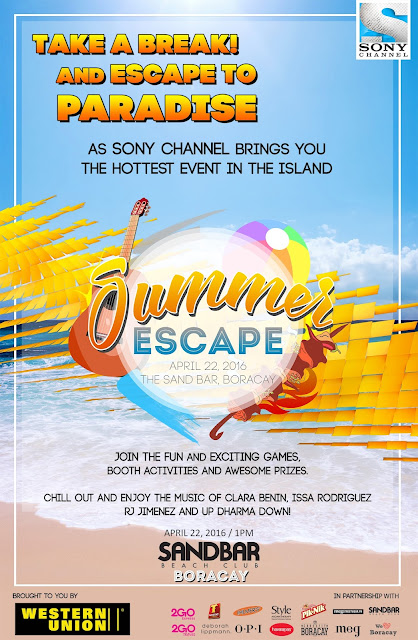 Sony Channel steals the scene as it hosts this year's Summer Escape in Boracay.

Fun-filled summer activities await the participants in this event happening on April 22 at The Sand Bar Station 1 in Boracay starting at 1PM, to be hosted by Jaz Reyes. In the evening, the mood is set with special performances by Clara Benin, RJ Jimenez, and Up Dharma Down.

To participate in this event, guests need to register by liking Sony Channel's Facebook page. After which, they’ll be given an ‘event passport’ which they could use to participate in different activity booths, and enjoy the evening performances as well.

About Sony Channel
Sony Channel is the premier destination for female-skewing entertainment with the biggest and best of Hollywood. Designed for the socially connected viewer, Sony Channel features some of the most captivating and talked-about drama, comedy, lifestyle and reality programs on TV, all airing close to the U.S. telecasts, together with popular feel-good movies.
Fresh, confident and stylish, with a dash of clever wit, Sony Channel is visually stunning with a brand identity that perfectly complements its line-up of high calibre programming.  Sony Channel appeals to a female-skewed, male-inclusive audience who loves to escape, engage and lose themselves in premium content. Viewers are modern, social, stylish and aspirational.
Sony Channel is wholly owned by Sony Pictures Entertainment and managed by Sony Pictures Television Networks, Asia, which also operates pay-TV channels AXN, Animax, ONE and GEM. See www.SonyChannelAsia.com, and joint the conversation on www.facebook.com/SonyChannelAsia and https://twitter.com/SonyChannelAsia for more.

*This is Press Release
Posted by Boy Raket at 12:23 PM