Kai Sotto, 6'9" and only 13 Years Young in Jr.NBA and Jr.WNBA Presented by Alaska 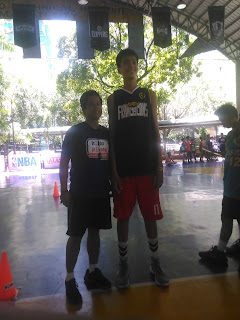 More than 1,000 participants in Don Bosco Technical School in Makati City but its really hard not to notice the tallest kid in the Metro Manila Leg of Jr.NBA and Jr.WNBA Presented by Alaska

Lets get to know him a little bit, this young kid, turning 8th grade this year in St. Francis of Assisi has been getting tons of attention lately specially in social media, he seems to not only tower over the eliminations but also attracting interests on other basketball programs and even universities.

He's trully someone to look after in the near future. Which I think will be inevitable being the son of former PBA Player Ervin Sotto.

Talking about him joining Jr.NBA National Training Camp and trying to make it to the final 10 boys to represent Philippines in the other Jr.NBA and Jr.WNBA camp in Asia

This is his 3rd year of joining Jr.NBA and Jr.WNBA Presented by Alaska and I saw his big improvement from the time he started, from dribbling, to defence and offence. 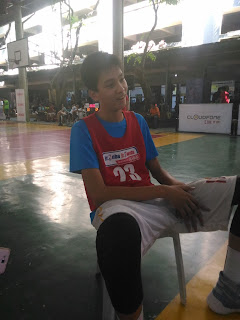 I had this opportunity to interview him together with my colleages. We learned that he's still motivated and eager to finally make it to the final line up of the Jr.NBA that will be flying abroad. He's also glad to see the other kids which were now alumni's of Jr.NBA and Jr.WNBA and was able to catch some tips from them as well. He said that he training everyday together with his Dad so he can improve on his skills as a player and doing all his best for this program.

I guess at this point is we'll see what's next for him and join me on watching over his journey in Jr.NBA and Jr.WNBA Presented by Alaska


The Jr. NBA and Jr. WNBA is the league’s global youth basketball participation program for boys and girls which teaches the fundamental skills as well as the core values of the game at the grassroots level in an effort to help grow and improve the youth basketball experience for players, coaches and parents.

For general information about Jr. NBA and Jr. WNBA Philippines presented by Alaska please visit www.jrnba.asia/philippines, www.alaskamilk.com, and   www.alaskapowercamp.com/basketball.  For live updates log on to www.playph.com follow us on Facebook, Instagram and Twitter @playph #jrnba #jrwnba.
Posted by Boy Raket at 9:25 PM