100 Filipino cultural dancers performed a thanksgiving dance that wowed millions of attendees from around the world at the recent World Culture Festival, the biggest gathering for world peace that brought together people of various nationalities and faiths on one grand, magnificent global stage in New Delhi, India. The Art of Living Foundation, founded by Sri Sri Ravi Shankar, organized the event in celebration of 35 years of service to humanity. 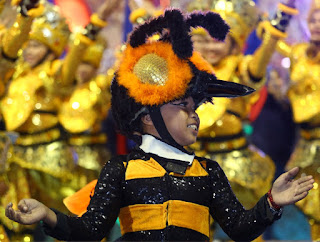 The dancers, who belong to the multi-awarded Buyogan Festival dancers from the province of Leyte, one of the areas ravaged by typhoon Yolanda, performed their celebrated dance to express gratitude to all volunteers and donors from around the world who helped their province recover from the disaster. Their attendance marked the first time that representatives from the Philippines graced a global event of such magnitude.

The millions in attendance during this the three-day event included thousands of artists, business, political and spiritual leaders from around the world. All were treated to cultural buffet of dance performances, ancient chants of peace, musical numbers, and inspiring speeches from around the world. The purpose was to celebrate harmony in diversity and love in a world that is increasingly ravaged by conflict caused by regional and religious divides.

Among those who made their presence felt were the likes of Vatican representative H.E. Bishop Marcelo, His Eminence, Grand Mufti of Syria Dr. Ahmad Badreddin Hassoun, and Rev. Gerald L. Durley, who is a good friend of US President Barack Obama. These leaders unanimously applauded Sri Sri Ravi Shankar for taking this spectacular step toward world peace.

His speech was immediately followed by a string of remarkable performances that echoed the essence of peace and togetherness, as the finest talents the world over shared the stage with the international dignitaries present.  Close to 1,000 vedic scholars sang chants from ancient scriptures while captivating dance performances left everyone breathless and in awe then 8,500 musicians from the Art of Living Grand Symphony, meanwhile, mesmerized the audience with their enchanting music.

On day two of the festival, the powerful spirit of hope—together with a call to embrace diversity and oneness—stood as the key, reverberating message. The awe-inspiring presence of faith-leaders coupled with the intense response from the crowd was further encouraged by Vatican representative H.E. Bishop Marcelo Sanchez Sorondo, “Buddhist, Hindus, Muslims, Jews and of course people from the religion I share, Christianity, give an incredible testimony that The Art of Living helps people to get more in whatever faith or tradition they follow. You help people to live in their faith ever more intimately and personally.”

Joel Ruiz, a film director and one of 30 others who had flown from Manila to take part in this peace celebration, recalled how he was hooked on to meditation after he attended a happiness workshop by the Art of Living in Makati. "I have come here so that I can meditate with this sea of people attending this celebration. We have to collectively aim for inner peace so that we can achieve world peace," he said.

The final day culminated with a finale number where all the thousands of international performers from all the groups including the Buyogan Festival danced simultaneously to a medley of songs making the idea of “One World Family” an experience of the audience.

Expressing his deep appreciation for the success of the festival, Sri Sri Ravi Shankar said: “To all of you, who have come from nearby and faraway destinations, from different faiths and nationalities, a heartfelt thank you. It’s your faith, love and compassion that have enabled the teams at Art of Living to present the biggest and the happiest family get-together—the World Cultural Festival.”

To know more about Art of Living programs and courses which have helped millions of people manage their stress and live happier lives through its various breathing and meditation techniques, visit www.artofliving.org, or call Kim 0917-848-0063 or Harsh 0905-469-8624.