Top Malaysian prospect Gianni Subba on road to ONE title 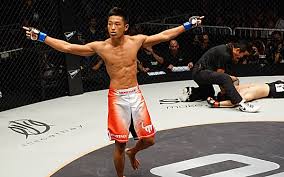 One of the top Malaysian mixed martial arts prospects, 23-year old flyweight standout Gianni Subba (7-1) will return to the ONE Championship cage next Friday at ONE: GLOBAL RIVALS, against the Philippines best flyweight bet Geje “Gravity” Eustaquio (7-4) of Baguio City’s Team Lakay. With a victory, Subba feels he will be one step closer to a shot at the ONE Flyweight World Championship.

“Whatever one championship has planned for me, the goal is to win a world title for Malaysia,” said Subba, who faces his toughest test yet in Eustaquio.

Eustaquio is arguably the Philippines’ most talented fighter at flyweight, with a record of seven wins and only four defeats. The Filipino stalwart is known for keeping his cool and composure in the face of adversity, while dishing out some of the fastest strikes in the business nicely packed in Wushu Sanshou.

For Subba, the fact that Eustaquio is also on the rise makes him feel their paths would inevitably cross one day.

“I always knew that I would eventually be fighting Geje [Eustaquio] so I wasn't surprised that I got the matchup,” said Subba. “He's fought some of the best in the division and I'm working my way up, it was inevitable.”

At seven wins and just one loss, Subba is at the top of the list of flyweight prospects on the cusp of a breakout performance. All Subba needs is one solid victory against a highly-ranked opponent, and he could be next in line for a crack at ONE Championship gold.

Eustaquio, 26, has competed for the ONE title before, losing via Guillotine Choke submission to former champion Adriano “Mikinho” Moraes. Despite the loss, the Filipino was able to showcase his solid striking technique and impeccable timing and although Moraes was able to gut out the victory, it didn’t come without resistance.

In Eustaquio’s most recent bout earlier this year, he stopped another Malaysian fighter in Saiful “The Vampire” Merican. Eustaquio clipped Merican on the temple with a clubbing left hook that sent him reeling to the canvas. The Filipino then finished the job with a technical ground kick, coercing referee Joey Lepiten to call a halt to the contest.

It was an abrupt and sweet night for Eustaquio, whose highlight reel finish made the rounds on social media shortly after his victory.

Despite his opponent’s high caliber, Subba feels he is well equipped to handle anything Eustaquio brings to the table.

“Filipinos are known to be durable and strong. The strategy is to beat Geje everywhere,” said Subba. “ I'm not afraid to test my striking and I'm confident in my ground game. Geje is tough just like the rest of my opponents before.”

A victory here should bring Subba one step closer to a title shot against reigning ONE Flyweight World Champion Kairat Akhmetov, or a gatekeeper fight against former champion Moraes.

On the flipside, after Eustaquio’s stunning victory over Merican last January, a victory over Subba may be just the ticket the Filipino will also need to book another title shot.

The winner of this bout will undoubtedly be lined up for another huge fight in the near future. But even then, if the opportunity doesn’t immediately present itself, Subba says he is fine waiting.

“If I have to wait, it will just be more time to work on my game,” said Subba, constantly working on improving his skills. “The motivation is and has always been to be the best that I can be. Having a supporting family and great teammates who have the same goals makes it easy for me to work hard day in and day out.”

*This is Press Release
Posted by Boy Raket at 10:30 AM