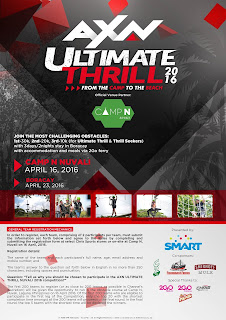 This summer, AXN brings to the crowd an energy-packed set of activities that would bring pure excitement to the crowd.

AXN Ultimate Thrill 2016 will be held in Camp N Nuvali in Sta. Rosa, Laguna, on April 16, starting at 6 AM. 150 qualified teams of 2 members, 18years old and up, will have to register one to two hours before the event. Registration can be done onsite or online at http://nuvali.ph/events/AXN-UltimateThrill-2016 and also at Chris Sports branches.

This event presents the thrill-seekers with a variety of obstacles including log hurdles, wall climbing, rollercoaster zipline, and more! After the morning activities, only 20 teams with the shortest time to accomplish the challenges would move on to the final round. Finally, at the end of the event, only 5 brave and tough teams will go on to the next leg of the thrills in Boracay on the following week.

AXN Ultimate Thrill 2016 is co-presented by Smart and is sponsored by C2 Cool&Clean, Fisherman’s Friend, and Smirnoff Mule.

About AXN
AXN is Asia’s leading general entertainment channel featuring exclusive top-rated drama series, blockbuster features, reality programs and ground-breaking original productions. The channel appeals to a discerning audience seeking content that is smart, intriguing and unexpected, and all delivered close to U.S telecasts. From The Blacklist and Quantico, to The Voice and The Amazing Race Asia, AXN is defined not by a genre, but by an attitude that truly redefines action.
Launched first in Asia in 1997, AXN is a global channel brand with a presence in Latin America, Africa and Europe. In Asia, the channel is enjoyed in 85 million households across 20 territories.
AXN Asia is wholly owned by Sony Pictures Entertainment and managed by Sony Pictures Television Networks, Asia, which also operates leading channels including Animax, Sony Channel, ONE and GEM.